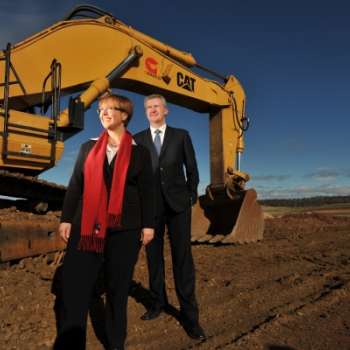 Mr Burke said the project was a once-in-a-lifetime opportunity for Tasmania’s agriculture sector and would create new opportunities and jobs for generations to come.

The Midlands Water Scheme takes water from Arthurs Lake and distributes it to farms within an irrigable area of 55,680ha stretching from just north of Campbell Town to south of Kempton.

Water from Arthurs Lake will be taken by 34 km of mostly buried high-pressure pipeline down the Western Tiers to a new mini hydro-electric plant and small holding dam west of Tunbridge.

From there a network of 103km of mostly buried pipelines, along with sections of waterways will get the water to farmers for productive agriculture use.

Premier Giddings said that the scheme would deliver water to approx 350 properties and in turn create up to 300 on-farm jobs over time. During the two-year construction phase, around 130 direct jobs will be created.

Gradco’s involvement in the scheme includes the design and construction of the Milford Dam, which is an integral part of the Lower South Esk Irrigation Scheme.

On completion, the dam storage capacity will be a minimum of 5996 megalitres and will cover an area of approximately 93 hectares. Gradco commenced work on the project in February 2012, with completion due early in 2013.