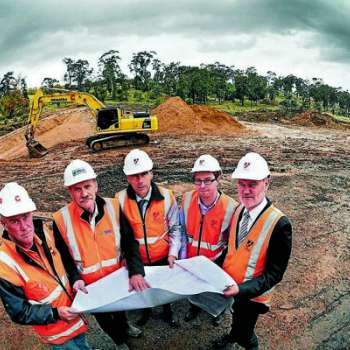 Gradco are proud to work in conjunction with the Launceston City Council on the $1.4 million expansion of the Mount Pleasant Dam designed to protect parts of...

Gradco are proud to work with the Launceston City Council on the $1.4 million expansion of the Mount Pleasant Dam designed to protect parts of Kings Meadows, Launceston from a 1-in-100 year flood.

Gradco commenced work early in March, with the project planned to be completed on schedule by the end of August.

The Mount Pleasant Stormwater Detention Dam collects water from the Kings Meadows rivulet. It was first built between 1900 and 1910, as part of the Mount Pleasant Estate, along with a 1860s homestead built by politician John Crooks.

The redeveloped dam is much larger than the existing dam, with additional capacity to accept water during heavy rain, and to control discharge so that downstream areas do not flood.

Gradco’s works included demolishing the original concrete dam and replacing with an earth and clay wall six metres tall, improving the spillways and some significant upgrades to stormwater and sewerage pipe works.

On completion the dam's total capacity will be expanded from less than one megalitre to 7.3 mega litres.