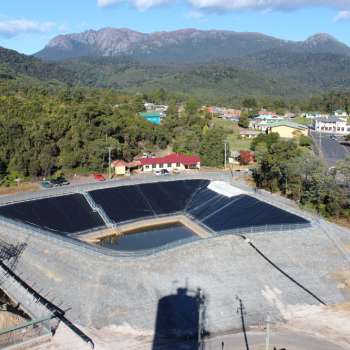 Gradco was recently named as a finalist in the 19th Annual Tasmanian Earth Awards Category Two, for our MMG Rosebery Stormwater Management Project...

Gradco was recently named as a finalist in the 19th Annual Tasmanian Earth Awards Category Two, for our MMG Rosebery Stormwater Management Project.

This project's objective was to environmentally improve the stormwater management within MMG's Rosebery Mine Site on the rugged West Coast of Tasmania.

MMG's major considerations for the project involved a focus on safety, adherence to MMG policies and procedures; minimising obstruction and interference to mine operations and a strong community interface.

The civil and drainage works were spread over 2 major areas of the mine, with additional minor works also being completed in other areas.

With the Rosebery Mine site having been in operation since 1936, it was not unexpected that there would be unmarked or unknown services lying beneath the surface.

These services, along with unmarked drainage lines and high-voltage cables were a constant consideration before each excavation across the entire site. Several unmarked services were discovered throughout the works, resulting in frequent changes to scope and procedure.

Approximately 5000 cubic metres of waste was removed during the excavation phase of the Level 8 detention basin excavation.

This waste was a combination of general rubbish, hydrocarbons and asbestos, and each element needed to be separated and disposed of accordingly.

The employment of an environmental consultant to be on-site during the excavations provided both Gradco and MMG with the expertise and skill required to manage these wastes in a timely and environmentally sensitive manner.

Gradco's licence to transport controlled wastes and our Mass Management Accreditation ensured the removal of asbestos and contaminated material was timely and carried less exposure risk to personnel.

This year's Earth Awards again showcased a selection of high calibre projects carried out by Tasmanian contractors, and which we were proud to be a part of.

Here at Gradco, we'd like to congratulate our employees who contributed to the success of the project – and all the other Earth Awards finalists on their achievements.